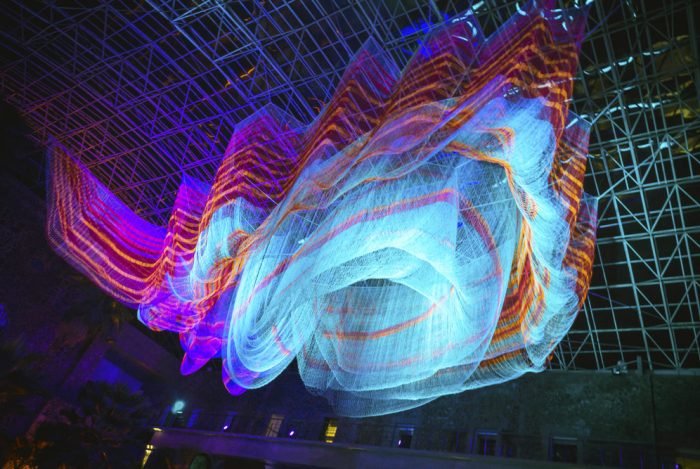 If you share our love for beautiful things and you don’t already know Janet Echelman, you should. Janet Echelman is an American sculptor and fiber artist. Her sculptures have been displayed as public art, often as site-specific installations. In a fascinating manner, Janet collaborates with lighting engineers to predict the behavior of light in relation to materials, weather, humidity, existing daylighting, and other factors.


At this year’s Boston Design Week, she elucidated the evolution of her colorful, massive public art pieces, from her experience working with paint to fishing nets. Echelman’s presentation, shown here, titled “Radical Design: Illuminating Cities through Public Art,” took place at the Boston Design Center. Echelman was walking along the beach in the fishing town she was based in when suddenly the fishing nets she had seen cast so many times before caught her interest. Intrigued by their free-flowing qualities, Echelman began her long journey in creating with nets.

Because Echelman was entering the uncharted territory of netting as an artistic medium, she has become one of the first to engineer this material. Her determination and drive for creating works that represent her vision have resulted in collaborations with aeronautical engineers, software designers, and even the director of Google’s Creative Lab.


Since Janet designs many of her creations for outdoor public displays part of her mission in creating art roots itself in strengthening the connections between cities and their populations. She said, “My form is not about work in a studio — it’s about an interaction with the city and with each person within it.”


At IBC Shell, we are constantly seeking inspiration to bring our designs to life.   Much like Echelman, we strive to take something seemingly simple and morph it into something astoundingly spectacular. We create designs that are visually stunning, famously effective and at the forefront of luxury packaging.


Linda Arcadipane is the Director of Marketing at IBC Shell Packaging.